THE WORLDS’ MOST EXPENSIVE DUCT TAPE!

Most tracks today are going to transponders to keep track of race position and log timing data. The most common way to mount the ”box” is to ty-rap the supplied mount to the bike somewhere or duct tape it to your boot when you race multiple classes.

Over the last ten years we have made many designs of transponder mounts for motocross factory teams. At first we just took the customers design and made the parts to specification not really worrying what the part did. We started getting requests from non-factory teams for a transponder mount. That is when I looked at what the mount really did and what the requirements were. It ends up that were making a mount for the mount to mount to, that mounted on the bike. That is waaaaaaay too many parts to do one job.

We designed a direct mount that installs in minutes, if you have the correct length bolt.

The week before the ’17 Vegas SX, I stopped by PC out in Corona to show the guys our new transponder mounts. They threw it up on the gram scale to check the weight against the carbon mount currently in use. Our mount was about 5 grams heavier but it only needs ONE longer bolt instead of two so it actually ended up saving about 10 grams. Mitch even weighs the graphics to make sure his bikes are lightest.

I showed up in Vegas for the race on friday and was making my rounds in the pits. When I visited the PC pits Sean, Hills’ mechanic, asked me if I had any of the mounts with me. I pulled a few out of the backpack and while I was digging, Sean busted out the T-handle to install it on the spot. Straight on the bike!

We have been supporting factory teams for almost 20 years so we know how hard it is to achieve change. Usually it goes like this. People complain about something needing to function better. We make a better functioning part and show at the races since that is when everybody is at the same place and time. The gear will look really racy backed up with a “pitch for the angels” sales presentation. Next the product will go in the top of the toolbox and MAYBE in a month it MAY get on a practice bike. 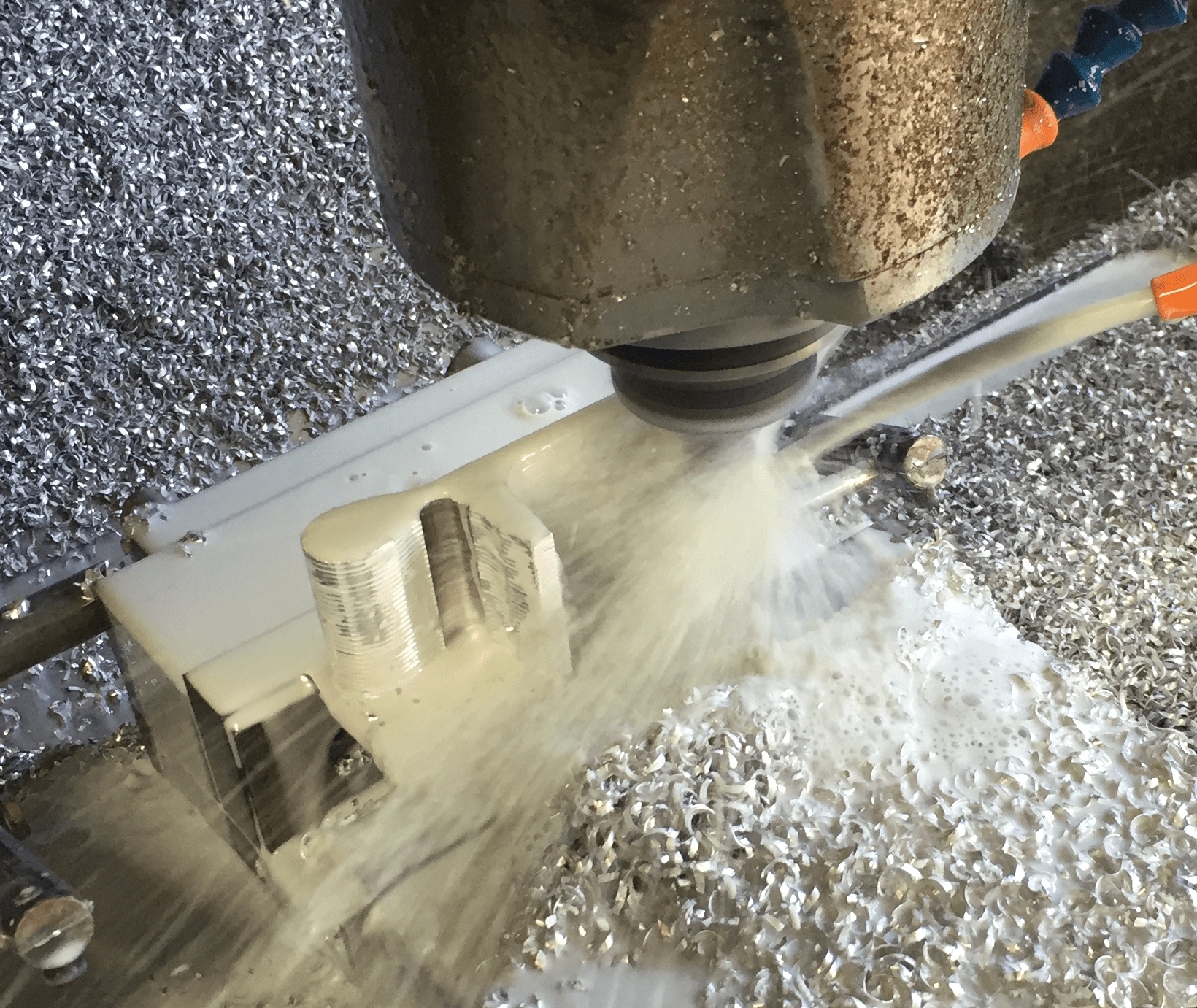 Shown here is operation one for producing the transponder mount. They are machined from billet 6061-T6 aluminum on cnc machines for accuracy and efficiency. 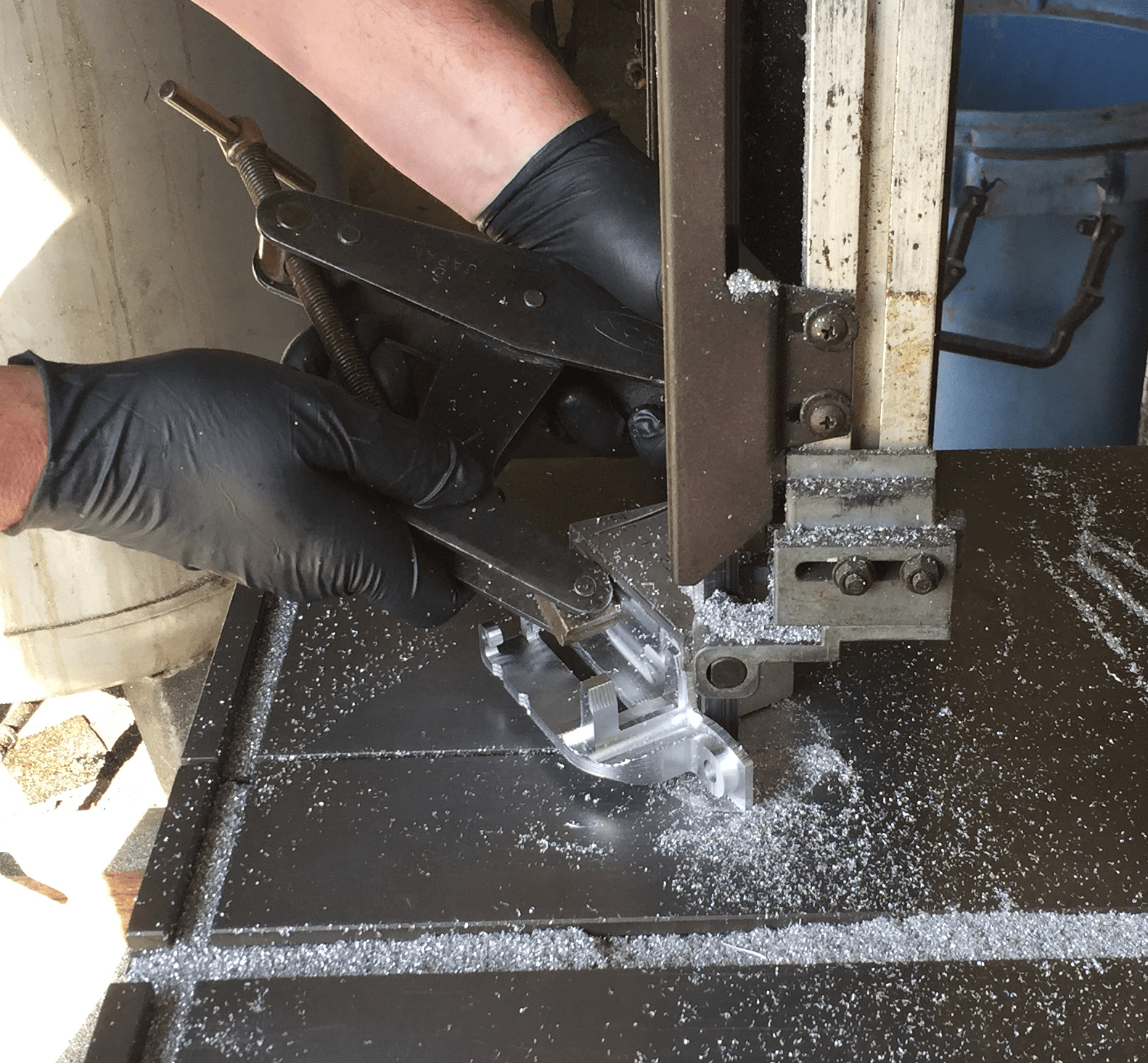 Next it is off to the saw to remove the excess material for the next cnc operation. Note the protective gloves and clamps to keep the job safe. 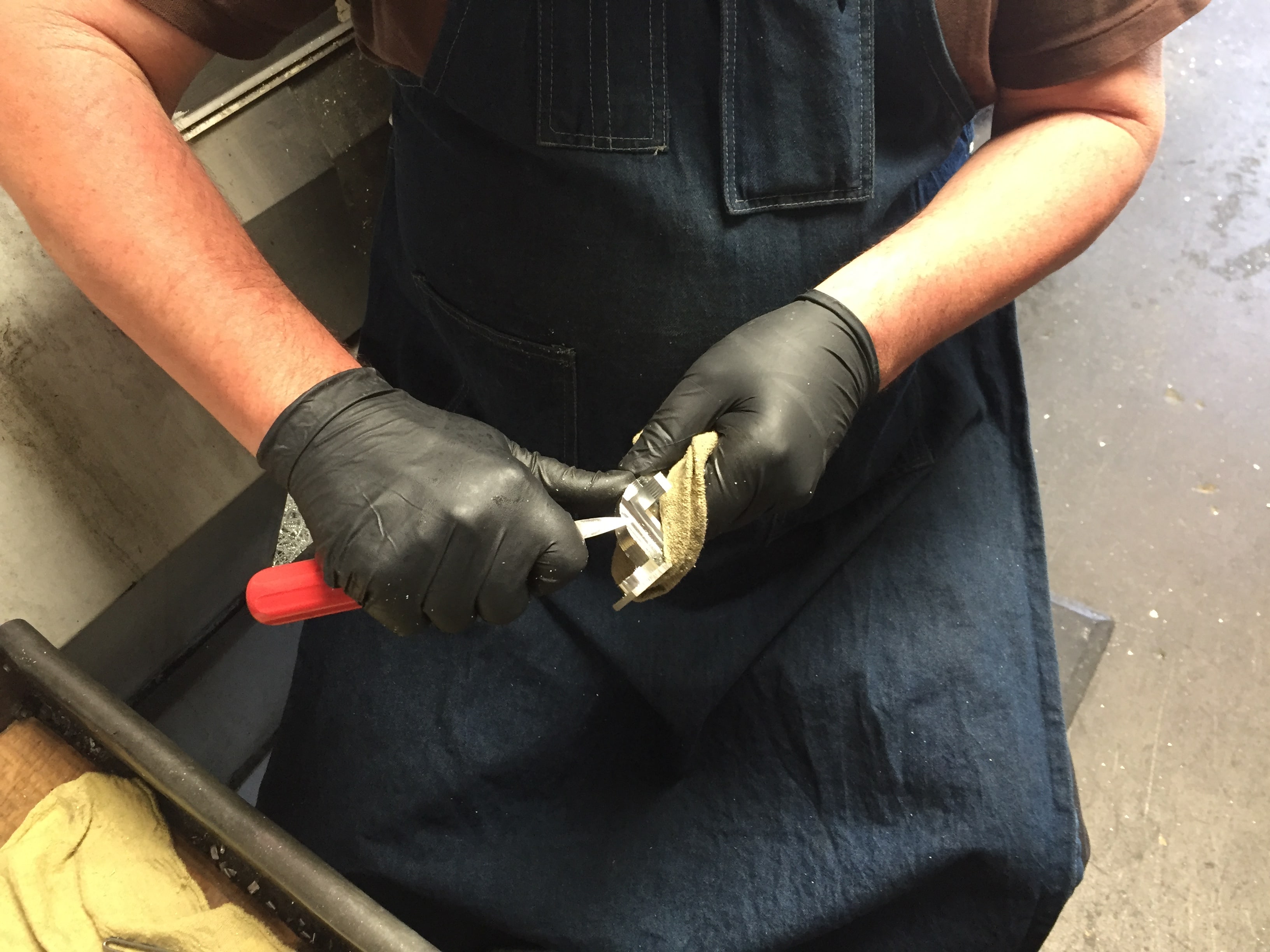 Hand work is necessary to remove burrs that would prevent the part from being located properly for the next step. 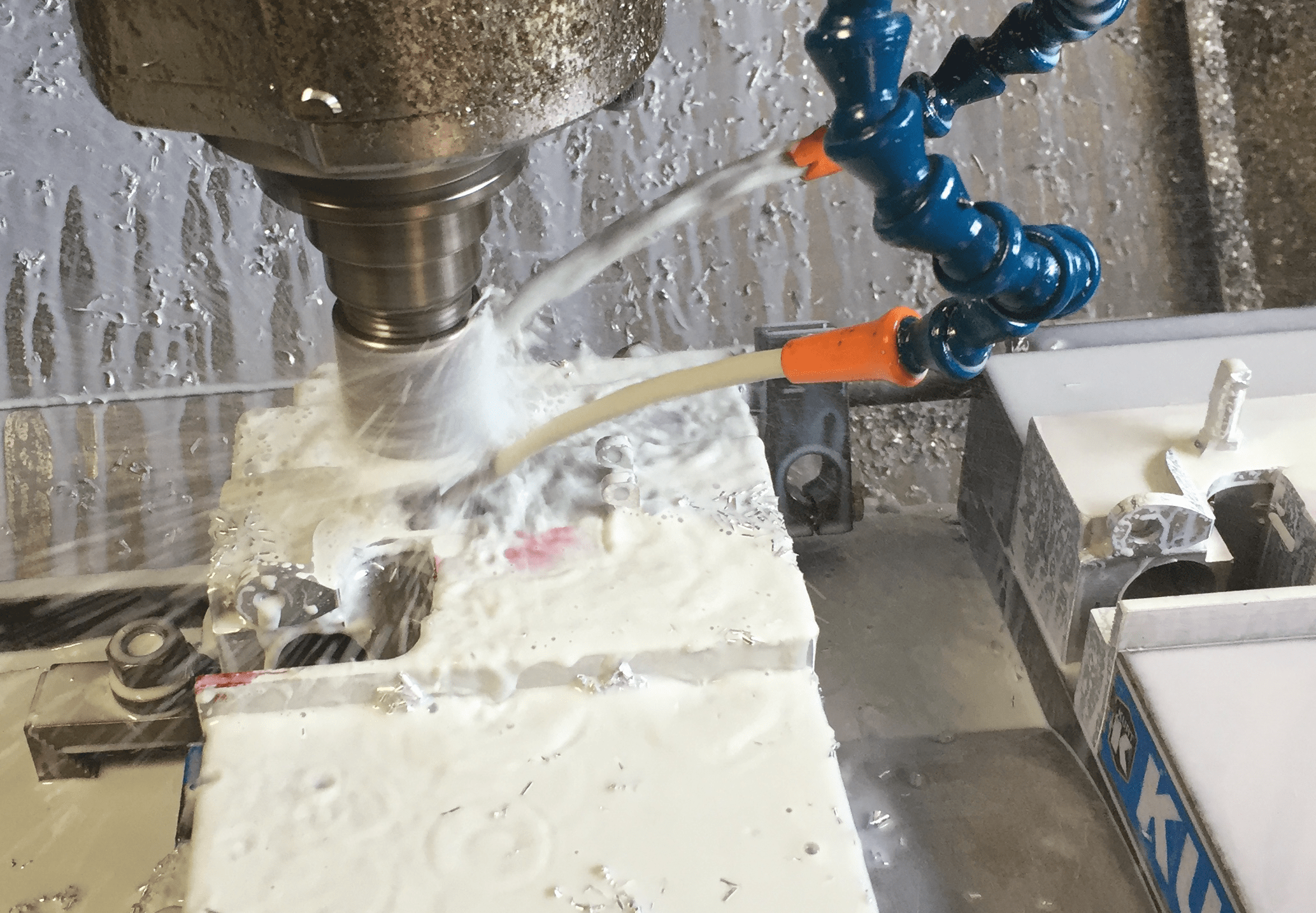 Back to the cnc machine to machine the next operation. After removing from the machine, additional handwork is done before sending off to tumble. 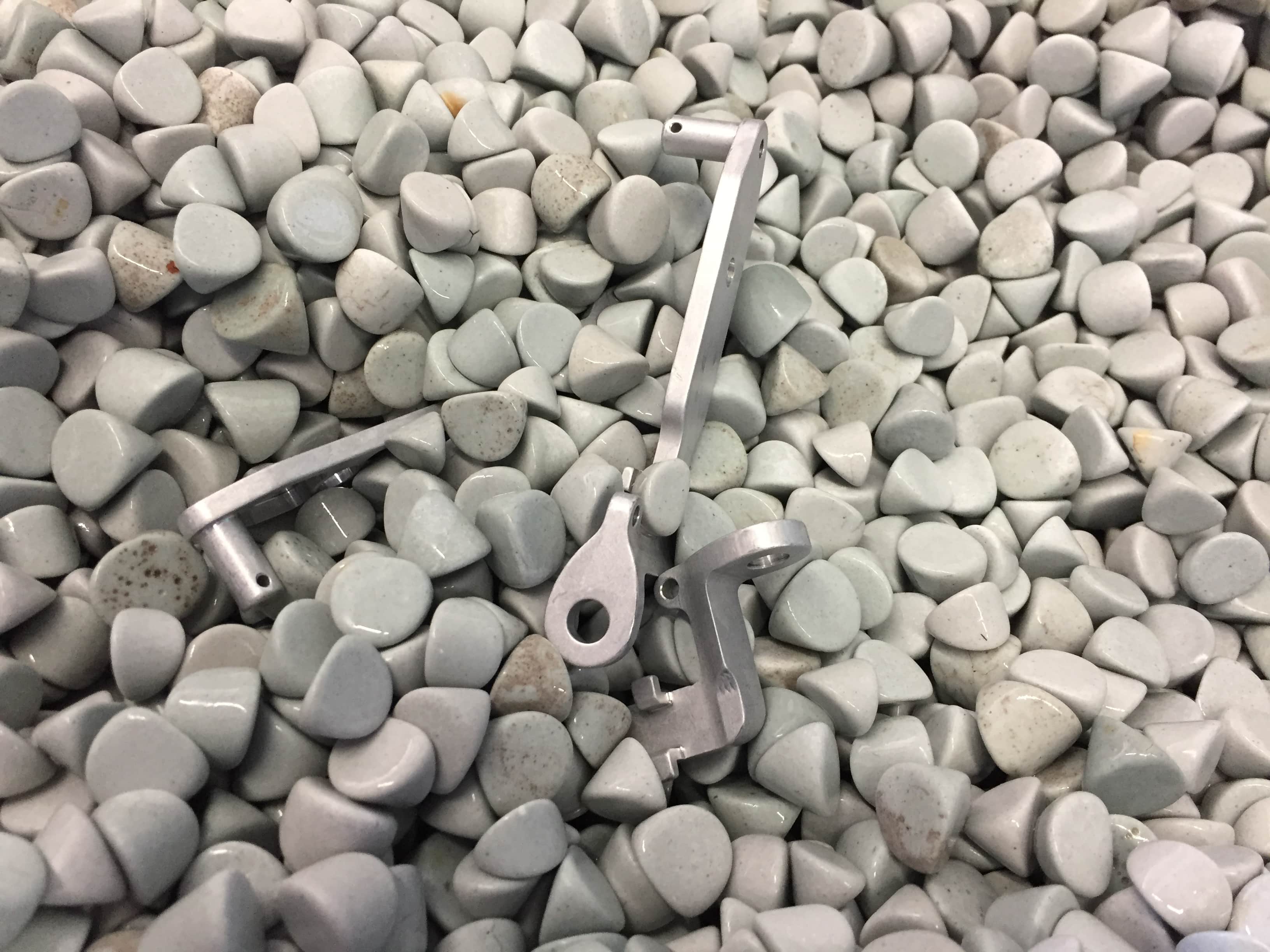 The vibratory deburring process smoothes the surfaces and rounds any sharp edges. This is the most cost effective way to prepare the part for anodizing. 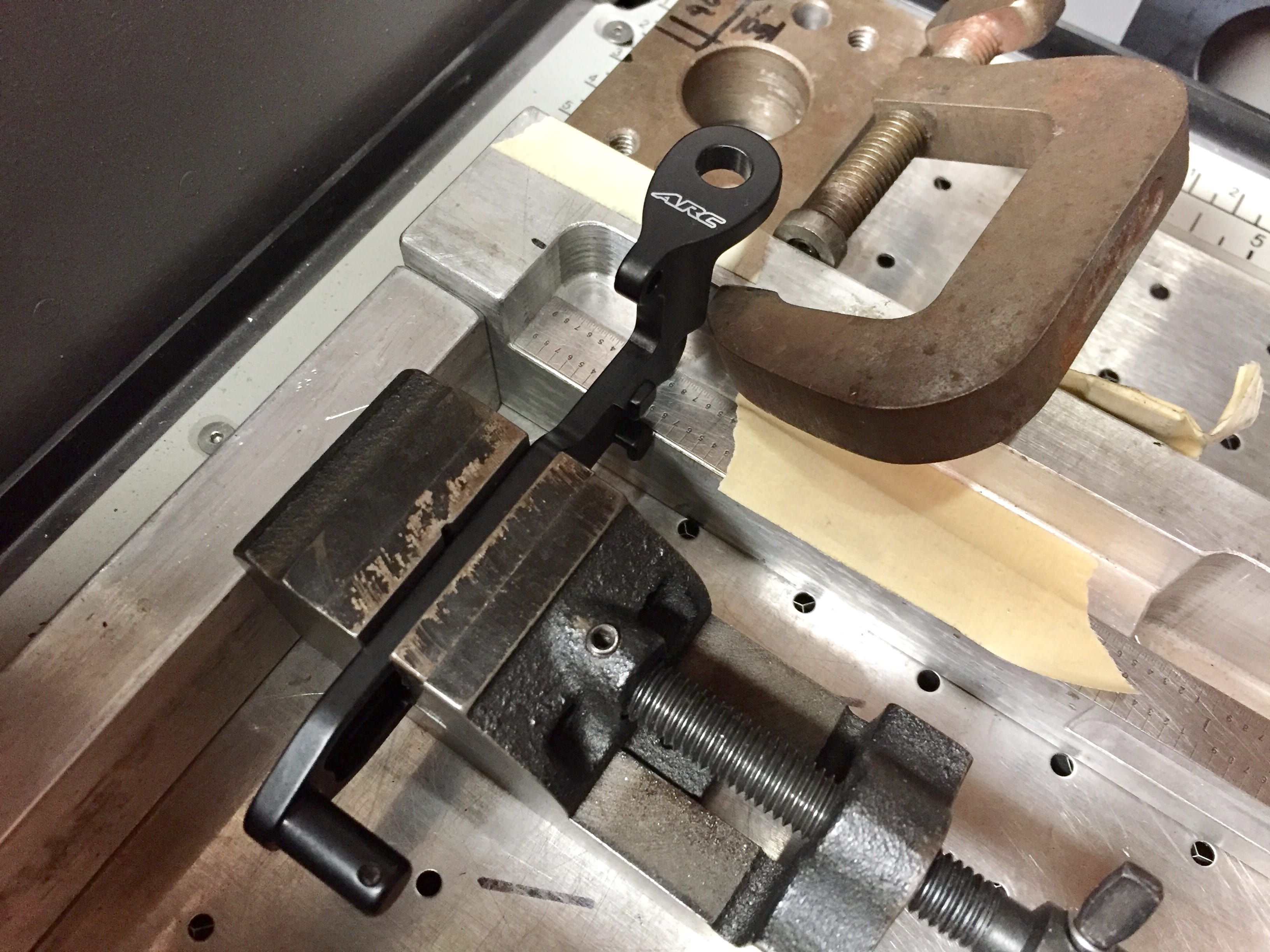 This is the setup in the laser machine for burning the logo on the "black" transponder mount. There are a lot of metal blocks with the vise and a c-clamp to get the job done. It looks complex but it only took about two minutes to position the part and locate as shown. The laser machine is a very versatile tool that adds the finishing touch on our gear. 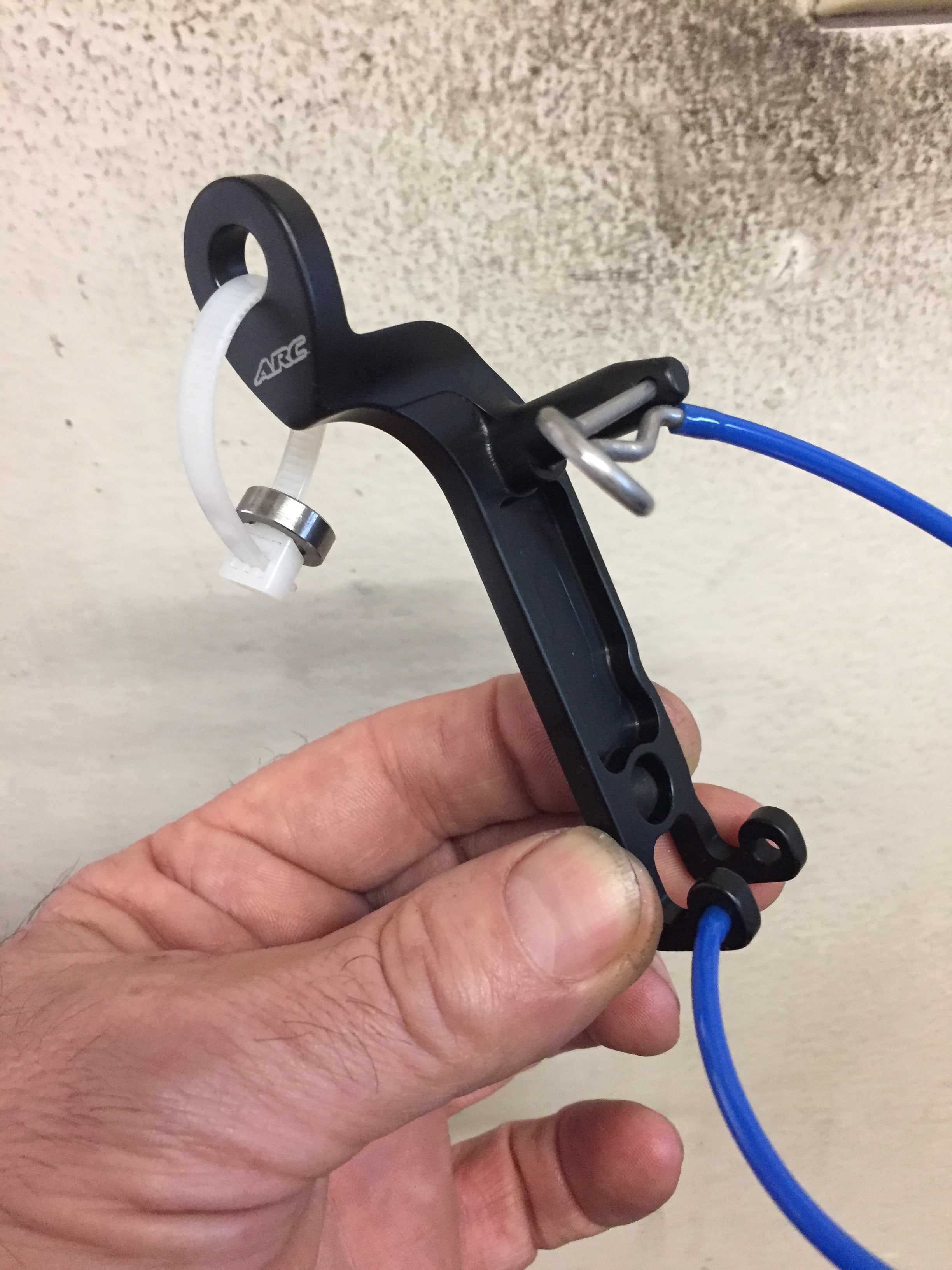 Here is a finished product after anodize, lasering the logo and installing the hardware. You can see that many steps are required and that these parts do not just “pop” out of a mold. They follow the same production steps that any aerospace product would be manufactured to. We are proud to say “MADE IN THE USA”.

The left image shows the “orange” box from Mylaps. This has been the industry standard for many years. On the right is the newer “black” version offered by Mylaps that will replace the orange model. The two models require different mounts.

On most current bikes the mount can be bolted flush to the clamp. A longer bolt may be necessary depending on the length of the stock fastener. There should be a minimum of 15mm exposed between the bolt head and mount before threading in. Less thread engagement may ruin the threads in the clamp. Take the time and get a correct length bolt. A fifty cent bolt will save a $200 clamp.

Some clamps have a recess where the fasteners are. A collar is supplied to give the space necessary for clearance. This is why we do not supply any bolts with this product. With all the applications that these products can fit we would have to ship with about 10 extra bolts.